Mon Dieu!  For those who have discussed politics with me, the title above is the antithesis of what I usually convey.  As a fiscal conservative and moderate, my leanings have always been toward taxes being collected only for areas where the government can do things best.  These include defense, a safety net for the truly needy (not lazy), infrastructure development, and establishing a regulatory framework that provides a level playing field for private enterprise.  When government goes beyond that, as it most certainly has over the past century or so, it wastes money on special interests and fraudulent spending, as well as encouraging the population to become lazy and dependent on government handouts (think former Soviet Union, for example).  Because there is no bottom line and because politics play such a heavy hand in decisions, government is the least efficient and effective way to get things done.

Most of us are happy to live in a democracy and feel fortunate to live in the U.S., warts and all.  To paraphrase Winston Churchill, democracy is the worst form of government except for all of the other choices.  Unfortunately, most citizens and politicians vote with their feelings or for what benefits them specifically instead of becoming informed about the issues and making choices that are good for the country.  “Democracy is two wolves and a lamb deciding what to have for lunch” (a quote attributed, some say incorrectly, to Benjamin Franklin) is frequently the case in our system.

BRIEF HISTORY OF U.S INCOME TAXES
The first income tax in the U.S. was started during the Civil War to sustain war efforts, and was in the amount of 3% for those making over $800 ($19,490 in today’s dollars, per Wikipedia).  The first peacetime income tax – 2% on high earners — was imposed in 1894 by Congress and then overturned by the Supreme Court in 1895.  The 16th Amendment, ratified by the states in 1913, made the income tax into law.

WHERE DO WE GO FROM HERE
The country is in a financial freefall from which it is nearly impossible to escape, and our current political leaders are unwilling and unable to solve the crisis.  Ideally, government spending will drop significantly (really drop, not just grow less), the Fed and bureaucrats will stop launching poorly conceived programs, and the country’s populace will recognize that they have lived for decades on borrowed money and now have to make some sacrifices.  Of course, none of those three will come to pass.

However, with some trade-offs, we may be able to make some inroads in that direction.  That would mean some compromises by the political parties and sacrificing some long-held fiscal beliefs by the rest of us.  Part of that would include raising the marginal tax rates by a few percentage points and closing many loopholes, and here are my thoughts on why:

1. The current reality is that the financially well-off have prospered much more than the middle class and lower-income segments of society over the past 2-3 decades.  The average CEO in this country made 24 times that of their average worker in 1965.   That number increased to 70 times in 1990, and is at 325 times today.  Reasonable people would not argue that the CEO should make much more than the average worker, but most would argue that the CEO is overpaid if he or she makes more than 300 times that of  workers.  Except for the occasional Steve Jobs (Apple) or Jeff Bezos (Amazon), very few CEOs offer the brilliance and insight to justify those types of salaries. 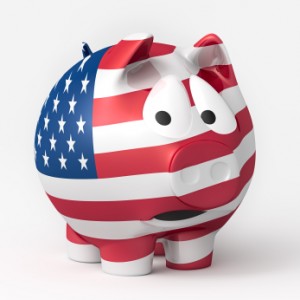 The average Joe on the street feels like the upper strata of society has proportionally too much wealth, and wants to somehow go after their finances.  They see statistics like that the top 1% of earners control 40% of the country’s wealth, and go ballistic.

Whether or not you agree that the wealthy have benefitted unfairly, the perception among the many is that they are getting screwed.  You can see that in the Occupy movement and other rallies that seem to be getting more commonplace.  My opinion is that riots and other forms of unrest will become much more frequent as the economy continues to struggle and folks become frustrated that they cannot pay their bills.

To help overcome the perception that the wealthy are getting all of the goodies, the political right is going to have make some sacrifices that they can point to as proof of their good intentions.  Even if the tax rates go up by just a few percentage points, fiscal conservatives can gain credibility to pursue more aggressive austerity programs and somewhat silence the tax-and-spend crowd.

2. In addition to the perception of unequal sacrifice, the reality suggests that those who are politically connected are gaining too much.  Bill Gross, the PIMCO bond guru, and Princeton’s Burton Malkiel said the same thing when they recently stated that capitalism now rewards the influential instead of the deserving.  The CEOs of Fannie Mae and Freddie Mac, the large banks, and others with powerful lobbying groups made millions while they drove their companies into the ground and had to be rescued by the taxpayers.  Because of their political connections and the difficulty in prosecuting these types of crimes, nearly all of those leaders have carried on without even a rap on the knuckles.

This is part of a much larger problem that may not be solved by anything short of an uprising, but informed citizens could at least vote with their feet to get rid of the worst offenders.  Unfortunately, the media generally does a poor job of correctly pointing out the true scumbags.  Regardless, getting some of that money back into the coffers and away from the undeserving low-lifes seems perfectly acceptable to me.

In summary, the country has a debt that is bigger than its annual GDP and no path forward to solve it.  While the country can only pay off most of its debt using high inflation, steps to reduce costs and raise revenues could and should be taken first.  That would mean having adult politicians and citizens acting like adults, and working toward the country’s best interests rather than just toward their own.  Then again, maybe that can be no more than just a dream!

Seascape Capital in part of a small elite of experienced, competent, and honorable note investors.  Across all 50 states, note investors buy mortgage notes on property types ranging from residential and commercial to vacant land.

One thought on “How Higher Taxes Help the U.S. — Note investors”