When my kids were younger, they, like most kids, would have gladly eaten as much ice cream and desserts as they could have gotten their little hands on.  They knew that ice cream tasted good even if they didn’t have an understanding of the consequences, like later having a stomachache and having no energy when the sugar high wore off.  All they knew was that eating ice cream made their taste buds happy.

As a society, especially among baby boomers, we have gotten to enjoy a high standard of living and received all sorts of free goodies over the years.  If I’m too lazy to work, I just tell the government that I’m looking for a job and I get an unemployment check.  If I am retired, 200 pounds overweight, and smoke like a chimney, the government will still cover most of my medical care.  If I want a loan to buy a house, government programs will guarantee that loan and Fed policies keep the interest rate artificially low.  What gets forgotten by many Americans is that someone has to pay for all of this.  Others like the Chinese and Japanese loan us the money by buying government treasuries, but the taxpayers eventually have to reach into their pockets to pay up.

Discussion on the upcoming “fiscal cliff” reflects Americans’ poor understanding of or not caring about basic math, in that you can’t spend more than you bring in and you cannot spend your way to prosperity.  The fiscal cliff term was coined to describe the challenge that the U.S. government will face at the end of this year, when Bush-era tax cuts expire (they were extended once already, in 2010) and automatic spending cuts kick in.  Both presidential candidates and most members of Congress agree that this fiscal cliff must be avoided at all costs.  Republicans eventually want to cut spending by large amounts, while Democrats eventually want smaller spending cuts and big tax increases.  If the fiscal cliff is not avoided, the Congressional Budget Office (CBO) predicts a dramatic cut to GDP, higher unemployment, and negative growth leading to a recession.  Specifically, the CBO states that GDP will decline by four percentage points and unemployment will climb by nearly a full percentage point. 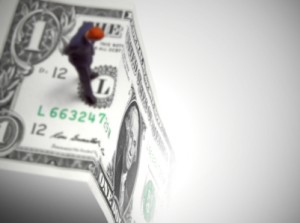 Rather Keynesian
It seems to me that the CBO forecast and political jawboning are too Keynesian.  In other words, the assumption is that government spending and programs are the main drivers of economic activity.  While I won’t minimize the impact that the fiscal cliff could have in the short term, I doubt that it would be near as catastrophic as Wall Street and politicians are telling us.  At the edge of the cliff, maybe we rappel down a short distance, jump to a ledge on the other side, and start our climb out of this hole of debt.  The CBO expects that keeping the fiscal cliff in place would reduce the deficit by $560 billion, which seems to me like a really good start to getting our financial house in order.

Instead of covering up the country’s problems with ice cream and happy faces, isn’t it time that we act like adults and take our medicine now?  Tax increases on the wealthy will need to be part of the solution to keep the peace and to prevent the income disparity between rich and poor from becoming too vast.  However, most of the problem is on the spending side, especially with our out-of-control entitlement programs and with our military acting as the world’s sheriff.  We simply cannot afford these and should have addressed the issues long ago.

Unfortunately, I would be willing to bet that nothing will happen before the election and that by Christmas the Congress will have extended the tax cuts and eliminated the spending cuts, thus making our debt problem even larger.  A crystal ball isn’t really necessary to predict that politicians will act just like they have in the past.