What would you do if you were owed $21 trillion?  Is that a number that most of can even wrap our arms around when we see all of those zeroes at the end?  Yet that is the amount that the Congressional Budget Office states will be the U.S. public debt in 2024 under current policies.  Of course, given that the current national debt is already at $17.3 trillion, and that there will undoubtedly be some combination of wars, major natural disasters, or economic failings over the next ten years, one starts to think that the $21 trillion figure is likely on the low side.  According to the CBO, interest payments will be $880 billion annually by 2024 and make up the largest section of the budget deficit — nearly what we spend today on Medicare.  You and I, as taxpayers, will be on the hook for that amount, as will our children and eventually our grandchildren.  Realistically though, that debt will never be paid back.

War on Poverty
Two of the major causes of this country’s overspending have been defense and entitlement spending.  Regarding the latter, what has all of that entitlement spending given us?  Robert Rector wrote for the Wall Street Journal last month that, fifty years after President Lyndon B. Johnson declared war on poverty, the war has been lost.  The poverty rate is still about 15%, and his goal of helping the poor become self-supporting has failed.  Throwing even more money at the problem, as liberals tend to want, would only exasperate the problem further.  Rector notes that “the federal government currently runs more than 80 means-tested welfare programs that provide cash, food, housing, medical care and targeted services to poor and low-income Americans.”  He goes on to note that 100 million Americans received aid from at least one of them in 2012, and that “federal and state welfare spending, adjusted for inflation, is 16 times greater than it was in 1964.”  While LBJ presented the war on poverty as an investment that would “return its cost manifold to the entire economy,” we have little to show from that investment.  Ask experts or everyday Joes the reason for this, and you might hear:

Regardless of your opinion on the reason for why we’ve lost the war on poverty, most of us would agree that the problem is likely to worsen in coming years. 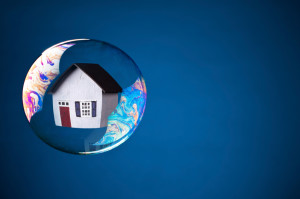 “There is always an easy solution to every human problem — neat, plausible, and wrong.”   H.L. Mencken

Impact on Real Estate
The general economy and median household income, of course, affect the real estate market.  But wait, the media tells us that real estate is doing fine, with home prices escalating and foreclosures falling.  Look a little closer, and things do not seem so rosy.  Realty Trac reported last week that distressed sales (foreclosures plus short sales) rose to a three-year-high and are still climbing.  The same report noted that 42% of all U.S. residential sales in December were all cash, compared to a normal maximum of 10% prior to 2008.  Does that sound like a healthy market to you?  In real-life, most people need a mortgage to buy a house.  First-time homebuyers account for a record low percentage of the market (27%), and 30-34 year-olds in 2012 had the lowest homeownership rate of any similarly aged groups before them (source:  John Burns Real Estate).  The escalation of home prices over the past few years has come from the Fed’s quantitative easing programs and from large investors (often with a tie-in to Wall Street) buying up huge quantities of homes.  The price increase is contrived and has no foundation underneath to support it.

The above news is not meant to be depressing or upsetting, but rather to add more clarity to how our government has failed over the last few decades.  The Fed has gone to extreme and terrible lengths to prop up the economy and stock market in the short-term, but that only delays the inevitable and makes it likely that the next downturn will be more severe.  Congress has recently been patting itself on the back for passing a monstrous farm bill that gives special-interest groups what they want without cutting any costs.  The politicians are only looking out for themselves, so we in turn need to take care of our own families.  Who knows when the stock market will correct, but I am confident that real estate will be in worse shape by the end of 2014.  As I have said before, that is a good thing in the long run, as it keeps an unwarranted bubble from growing ever larger.  We just have to keep an eye on the details of the news instead of only the headlines.